The Distributor of the Year 2014 title goes to AB S.A.

CONTEXT is an international research organisation, dealing with market analysis and pricing strategy within the ICT sector. This year, the organisation has awarded AB S.A. the title of the „Distributor of the Year 2014 in Poland”. The 2014 Distributor of the Year Award for AB SA is the more valuable because it is awarded based on the results of the ChannelWatch EMEA 2014 survey carried out by CONTEXT. The results of the survey, regulated by strict rules, are based on a sample group, comprising 3500 resellers from Europe. 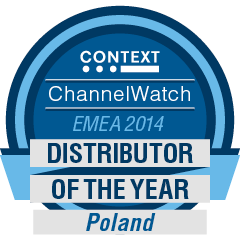